Folding bike and a bike shop

Last weekend in Austin, I gave a paper and organized a couple of panels at the excellent Flow conference. I’d been to San Antonio before, and liked it, but as a Californian I grew up thinking Texas was just about the opposite of most things I was used to. In San Antonio, this idea was supported upon my visit to the Alamo (there’s no basement indeed). Most California kids do a report on the missions at some point, and each mission spends a lot of time talking about the native peoples, the Spanish economic system, revolts, the Mexican period, and annexation after the Treaty of Guadalupe Hildago. The Alamo didn’t discuss much of this — but focuses on the victorious Texas Republic!

I’d always heard Austin was a fantastic place, and after a short weekend there, I’m really warming to the place. I was warm, too – but a nice, welcoming kind of warmth, especially at night at the many outdoor bars and eateries. I stayed at the Hotel San Jose on South Congress, which I’d strongly recommend. Visited many of the places on my terse to-do-list around there: saw a show at the Continental Club, browsed the curiosities at Uncommon Objects, and ate a lot of BBQ. One of the coolest things about the S. Congress area is the mid-century vintage vibe that’s been embraced by business owners. I also loved the trailer food set up all around town:

Pool at the Hotel St. Jose 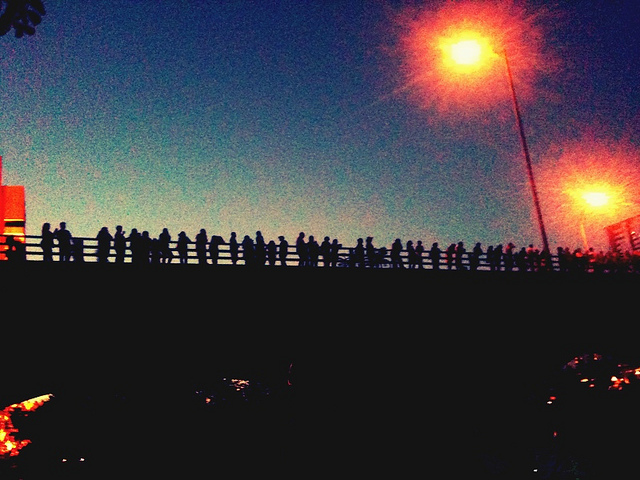 Waiting for the bats at S. Congress St. Bridge

I took my Tikit to explore a little more. There is something quite satisfying about getting to a hotel room and having a usable city bike ready in 15 minutes. I don’t bring a folding bike on trips for fitness, but to see stuff beyond the pedestrian range, the tourists’ gaze, and mass transit corridors. Traveling with the bike was as easy as ever, although TSA broke one of the latches on the Samsonite case on the return flight (I got it cheap at Macy’s – not the Bike Friday edition). Nevertheless, I was excited to explore the city. But time was not on my side for cruising the countryside, as the conference was just too damn interesting. I got to go up and down Congress a few times, rode around the Capitol grounds and U-T Austin, and along the river for a bit on chip-seal. I enjoyed riding around Austin, for sure. There were many roadies heading out to Hill Country, and a very good group of transportation riders moving about the city with ease and grace. The conference happens every two years, so I’ll be back in a while, sooner if I move there! Quite the seductive place.